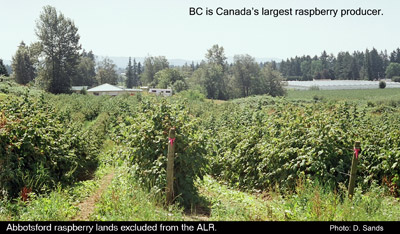 “Evidence is mounting that the Agricultural Land Commission’s Regional Panel system is not providing adequate guardianship of the province’s scarce agricultural lands,” says Ryan Green, the law student who authored the ELC report. The report identifies flaws in recent decisions, including:

• Approving tourism buildings on Agricultural Land Reserve land (ALR), on the assumption that they can later be removed and the land restored to agricultural use;

• Preferring the evidence of a developer’s consultants to that of public servants with expertise in agriculture; • Approving the removal of land from the ALR without sufficiently testing key evidence; and

• Failing to consult the local farming community when making a decision that would affect them.

“The flaws in the decisions analyzed in this report show that there must be a full inquiry into all decisions made by the Regional Panels since they were established in 2002, to determine how the system can be fixed” says Dave Sands, of the ALR-PEC.

The report: Case Studies of Agricultural Land Commission Decisions: The Need for Inquiry and Reform (PDF)